It's been 7 years since we last visited Paris. Cate was just 4 then, and couldn't go on the bigger rides, so here was a chance to go back and try out everything, and to see if there was anything new at Eurodisney.

The last time we came we stayed in the Marriott Village, thanks to some points collection from work trips. No such luxury this time, but Disney does 4 nights for 2 at its hotels at certain times of the year, so we took that option this time. It's still pretty expensive, but we went for the cheapest hotel, just bed and breakfast, and park tickets for the 5 days are included in the package.

We flew over on Easyjet, and had to get transfers to Eurodisney. The TGV out was 2 hours after the plane got in, and the bus was 20 euros each, so a private taxi was just as cheap at 60 euros from Prestige Transfer. The driver met us at Arrivals and took us to our car then straight to our hotel. We booked the TGV to the airport for the way back home.

Our hotel was the Santa Fe, done up in a middle America, Route 66, desert style theme, with sillouettes on all the roofs at night, which was nice to see, plus the theme is taken into the rooms too: we had traffic cone light shades for instance. Rather than a single building, the hotel is spread out in separate buildings with a main reception/shop/restaurant building at the front.

Breakfast was a bit manic, being a buffet style thing but with a fairly poor choice of food: there were some cereals (but no muesli), bread and croissants, and some cold meat. No chocolate doughnuts here. However some mums seemed to be taking a bit of a liberty and making up sandwiches to take to the parks with them. We did steal a slice of bread to feed the fish.

Our building was almost exactly a mile from the Disneyland Park gates. There's a courtesy bus, but we only used that to carry our luggage to the station on the way home. The walk was actually very nice, alongside a river-like pond with huge carp in it. We passed all the other (more expensive and closer) Disney hotels on the way, then had to go through the Disney Village (restaurants and merchandise) to get to the parks.

There's been a few major terrorist incidents recently, in Paris and in Brussels, so security forces were unsurprisingly present. We had to get checked through security to get into the park-and-village area, but once we were in it was fine. And the security folk were very friendly, so the experience wasn't too bad.

There are two separate parks to Disneyland Europe. The bigger one is Disneyland Park, and it's open longer at night, up until 10pm while the other park shuts at 7. A perk for the Disney hotels is that you get in to this park early too, at 8 instead of 10am, so we tried to use the late and early hours to beat the crowds and get on the rides we wanted.

Top of the list were the two roller coasters that we weren't able to go on last time. Space Mountain was a special target since it's inside in the dark and a bit more exciting. And we wanted to go on the Indiana Jones ride as well. Disney do an app which you can install on your phone, showing a map of the parks with your location, and waiting times for all the rides. This was really useful and we didn't wait for more than half an hour on any rides for the time we were there.

The roller coasters weren't too busy anyway. Because of their height restrictions a good percentage of the visitors can't go on them, so the queues aren't too big. And on the last morning we managed to go right through on to Space Mountain without queueing at all. Claire only went on it the first time though. Two minutes of screaming and three hours of nausea kept her from trying again.

The other thing we didn't do last time was stay late. The park lights up at night and there's a music, light and fireworks show at the castle at 10pm, so on the second night we stayed in to watch it. It was fairly impressive and worth staying up for.

The rest of the rides in the main park are a bit tamer than Space Mountain but fun nonetheless. We enjoyed the Buzz Lightyear ride, where you get to shoot at targets with laser guns and are given a score at the end. I thought I was doing OK on the first run, until we stopped. Then I noticed Cate's score was shooting up. She was just repeatedly shooting the same target. I learned my lesson for the next time.

It's a Small World was good fun, and Pirates of the Carribean was good too. Thunder Mountain was shut for maintenance and unfortunately the Phantom Manor was shut due to an accident where a worker was electrocuted.

We tried to reproduce a few of the photos from last time. Here's Cate on the Casey Junior train, at 4 and at 11. 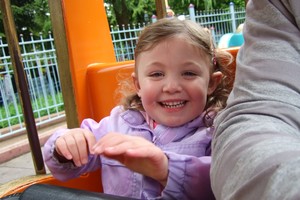 Drama at the Studios

The other, smaller, park is Disney Studios, which places a bit more emphasis on the filming process. Unfortunately the big roller coaster here, the Aerosmith ride, was closed, but the Tower of Terror was good and there were two new sections in the park.

The Ratatouille ride, set in its own little corner of mock Paris, was very busy, with queues up to two hours. We weren't standing in a line for that long, so got some Fastpass tickets and came back when our time was due, getting in in about ten minutes instead.

Here we were put into little rat-shaped cars, which drove themselves through the ride rather than being on rails. Some of the ride featured pipework and the like as if we were scampering behind the walls of the restaurant, and we stopped a few times at big screens which made it look like we were zooming over the restaurant floor, the effect increased by the 3D glasses and the rats rumbling as if we were moving. It was all very good and worth the wait, just not in a two hour queue.

On that note the one ride we missed even though it was on was the Crush's Coaster ride, which had huge queues all day and no Fastpass.

The other new area in this park was the Toy Story Playland. Here they had the RC Racer, a U shaped ride a bit like the old swinging pirate boats, Commando Drop, where you get lifted up high and dropped down, and the Slinky ride, which is a tame roundabout ride. We joined the single rider queues for the RC and Commando Drop rides, which was quicker than the normal queues.

We also got a chance to recreate some more old pictures here with a photo opportunity with Buzz Lightyear. Unfortunately we didn't see Sully at the Monsters Inc area this time. 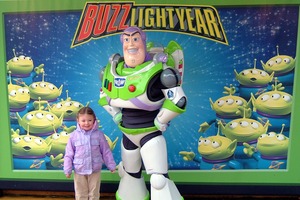 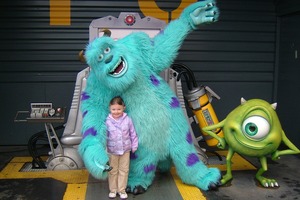 We didn't just spend all our time in the parks during the week, though that was the main focus. Outside one of the Disney hotels there's a plastic ice rink, presumably to evoke the feeling of New York in the winter. Cate had a session on the "ice" but thought it was a bit difficult to skate on and not nearly as good as real ice.

We also had a few shopping trips to the nearby Val D'Europe shopping centre, while going out for dinners (see below). The shops are mainly designer ones so not really of interest to us, but we did find a big toy shop, and the Auchan supermarket was worth visiting for provisions and sweets to take back home. In fact we still have a plastic bag Claire uses for the weekly shop from the last time we came here. The supermarket cheese counter was something to behold!

We didn't want to feel fleeced every time we went out for food, so tried to avoid the Disney Village restaurants. We did try the Videopolis place in Disneyland Park for the first night, just because we didn't fancy any more travel, but for the other nights we took the short train journey to Chessy (the Val d'Europe stop) and found some restaurants. The Pizza di Roma Italian was good (fried egg on the pizzas of course), a Chinese place in the shopping centre was decent and Alfred Burger was great, with proper burgers and great chips at a decent price.

On Wednesday we spent the day in Paris, buying a Ticket Mobilis each to cover all the train and Metro journeys. This worked out great until one of the tickets stopped working and we had to rely on some nice locals to get us through the barriers.

We started off at the Arc de Triomphe, and walked our way down the Champs Elysee, stopping off at the Haagen Dazs shop of course, past the big wheel and obelisk at the Place de la Concorde and on to the Louvre, scene of the famous "putting my feet in the fountain at the Baloubre" incident. Unfortunately the fountains were dry this time, which was ironic given that the sun was out. 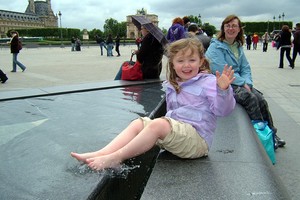 Next stop was Notre Dame, and hey, we were already next to the river so why get the Metro when it's just a short walk, right? Well, OK, not that short. Apart from Cate nearly falling in the Seine, we made it to Notre Dame without incident and had a bite of lunch.

The majority vote said we were going by train for the next bit, so off we went to the Metro station and took the train to Bir-Hakeim, gave the accordionist a euro and found the Eiffel Tower (it was the big pointy thing).

I was willing to pay for the lifts this time, (and last time, it was the big queues that put me off last time, honest!) but Cate wanted to climb the stairs so we went in at the South pillar and climbed. Surprisingly it seemed easier than the last time, so either we've gotten a bit fitter or the tower's smaller. You can only actually climb to the second stage, but that was high enough for us.

After getting back down, and after Claire got a crepe, the vote was that we'd had enough, so it was back to the Metro and railway all the way out to Disneyland again.

So that was our short week in Paris. I think we've had enough Disney for a few years again, and now we're looking forward to the big holiday in the summer. 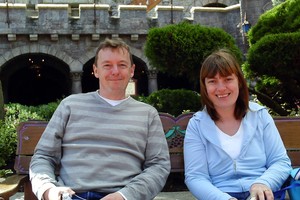